There are many asteroids in the belt between Mars and Jupiter as well as other bodies traveling through our solar system. Some of them are large enough to make a difference as they pass through the signs of the zodiac. Many astrologers use them in their charts to add extra knowledge to the signs they are influencing.
The primary asteroids that are used in a birth chart include Ceres, Juno, Pallas Athena and Vesta. Another cometary body that is large enough to be used in birth charts is Chiron, which is found between Saturn and Uranus.

The asteroids were all named after the female family of Jupiter. Ceres his sister, Juno his wife, Pallas Athena his daughter and Vesta another sister. Much of the feminine is left out of astrology aside from Venus and the Moon. The asteroids help add the feminine back into the astrological chart.
Chiron was a centaur in Greek mythology who was known as a great healer and the most significant of the "centaur" asteroids. 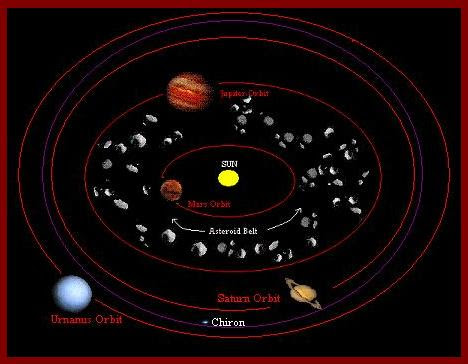 Chiron is located between Saturn and Uranus and is considered a "centaur" asteroid. In reality it is a comet nucleus. It was discovered in 1977. Also known as the Planet of Healing, Chiron deals with all aspects of health and disease and how they affect our spiritual path.
Chiron was wounded himself, and despite his great skills, he never healed. He symbolizes everyone who finds their strength through their suffering. Everyone gets wounded in some manner. Whatever our wounds are, Chiron influences us to overcome our condition and go on. Like Chiron, we may find that in healing others we gain some insight and salvation even though we are unable to fully heal ourselves.
Chiron has an unusual orbit, rather like Pluto. Many astrologers think of Chiron as a "mediator" between Uranus and Saturn. Chiron gives wisdom and patience as well as mastery over the darkness of our souls. Our wounds are gifts when looked at from a different angle. They give us character, lessons in life and perseverance. Chiron teaches us these things whether we are ready to learn them or not.

Look for this glyph (symbol) on your birth chart and note the Zodiac Sign it's in. Once you've done this come back and read the interpretation below.
Asteroids: Interpreting the Chiron Signs

Ceres was the first to be discovered in the asteroid belt. It has since been reclassified as a dwarf planet, which would make Ceres at least as important as Pluto in the astrological chart since they are both dwarf planets.
Ceres was the sister of Zeus (Jupiter). She is the quintessential Earth Mother, and rules over food, cooking and nutrition. Wherever she appears in your chart, she shows how best you feel nurtured. This is also the area where you can easily provide love and comfort.
Your Ceres Sign influences mothering, hard work, parenting, and gardening as well. It will show how well we go with the flow… the universal one, that is. This is the unification of both giving and receiving through ourselves as an exchange of energy. Ceres is associated with fertility, the uterus and stomach. On her negative side, she influences grief, work problems, eating disorders, custody issues and kidnapping. She may influence low self esteem, fear of abundance, feelings of abandonment or unworthiness, over-attachment, possessiveness, parent-child complexes and barrenness.

Look for this glyph (symbol) on your birth chart and note the Zodiac Sign it's in. Once you've done this come back and read the interpretation below.
Interpreting the Ceres Signs

Pallas Athena was the second asteroid discovered. Named after Jupiter's daughter, Pallas Athena is intelligent and cerebral. She is the weaver of patterns, linking ideas together. She is strategic command in both the warrior and the peaceful general.
Cities are her domain. She has an interconnection with Libra because of her focus on ideas. Like Libra, she can see both sides. She is not blind justice… she is only just. She is creative and artistic. She is a survivor. She expects everyone to claim their personal power.
Where her influence falls is where you will find talents in the following areas. Jupiter's daughter carries influence over many things, such as the immune system, the arts, the father/daughter relationship, intuition, justice, wisdom, defense, horses and the kidneys.
With her spotlight on daddy's little girl, Pallas Athena will help determine how you interpret your relationship with your father, and in turn how you treat all males in general. On her negative side, Pallas Athena touches on conflict, legal battles, injustice and illnesses due to a weakened immune system.

Look for this glyph (symbol) on your birth chart and note the Zodiac Sign it's in. Once you've done this come back and read the interpretation below.
Interpreting the Pallas Signs

Juno was the third asteroid to be discovered. Juno is the wife of Jupiter. She has some similarities to Venus, but while Venus sparks that initial attraction, Juno makes the commitment. She sings of soul mates. As she moves through the sky, the face of relationships change, but she still stands for commitment of one kind or another.
Where you find Juno in your chart is where you may meet someone that you will remain with for a long relationship. She covers marriage, fashion and beauty. She is the patron of relationships and true love. Diplomacy is part of her sphere.
She has influence with the weather, flowers, fairness and female genitalia. She also dealt with many of Jupiter's infidelities, and thus has influence over the negative issues of spouse abuse, powerlessness, women's rights (both positive and negative), rage, inferiority complexes and unfairness. She may also affect issues of denial, betrayal, inequality and of course bitterness.

Look for this glyph (symbol) on your birth chart and note the Zodiac Sign it's in. Once you've done this come back and read the interpretation below.
Interpreting the Juno Signs

Vesta is the second largest asteroid in our solar system and the fourth to be discovered. Vesta is a sister of Jupiter, the virgin goddess. Vesta is the keeper of the hearth. She is focus and dedication. She is mental clarity and self-respect.
Vesta brings out your purest potential and Essence into being. Vesta is organized and perfect. She has a talent for breaking things down into its components. She rules the metabolism and the upper intestine. She carries influence over locks and keys, sisters, security, investments, insurance, and inheritance. She is the epitome of the home and family, ritual, chastity and sexuality, and devotion.
Her negative aspects include insecurity, lack of focus, promiscuity, segregation, secret societies and family troubles. There may be a fear of sex or intimacy, as well as an invalidation of self. Denial can be a big aspect when she is negative.

Look for this glyph (symbol) on your birth chart and note the Zodiac Sign it's in. Once you've done this come back and read the interpretation below.
Interpreting the Vesta Signs
Posted by Daisy at 07:41